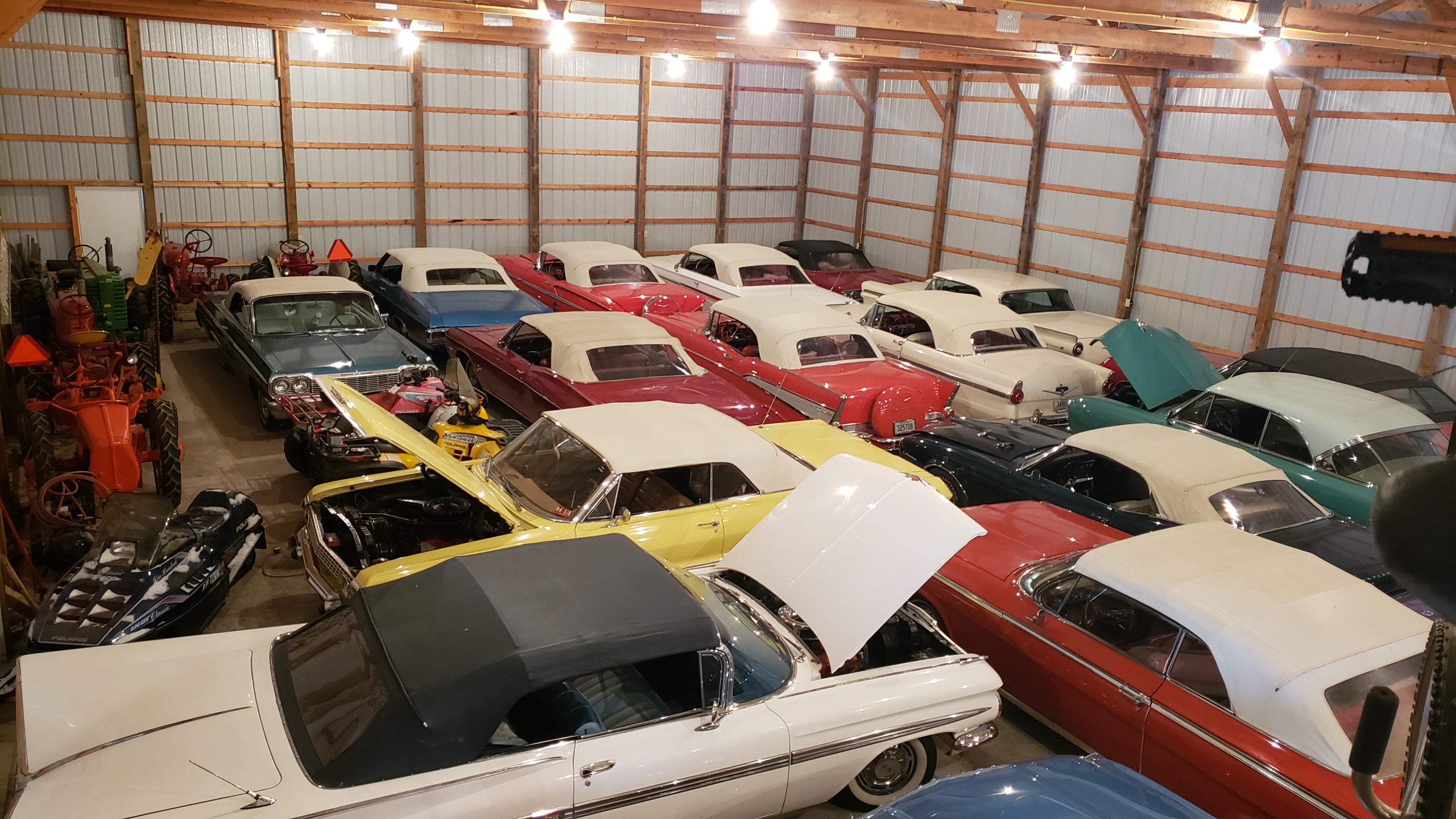 They say that you never forget your first car. For Ron Windels, that statement couldn’t be truer. Ron’s first new car was a yellow 1962 Chevrolet Impala Convertible. That convertible would find him the 2 loves of his life, his wife Carol and the start of his Chevrolet Convertible-Classic Collection. Carol can remember she saw that pretty, yellow Chevrolet convertible and driving by and one of the coolest guys from school at the wheel. Ron gave Carol a ride home from school and that’s all it took; it was love at first sight. They went to college and married. Their honeymoon was cut short and Ron got drafted into the Army. Carol was home as a new bride and Ron was serving in the Mekong Delta. 9 month later Ron would learn that he was a new father while thousands of miles away from his family. During a firefight, Ron had his arm shattered and earned the purple heart. He came home to find a new daughter and his wife waiting for him, but not the 1962 Chevrolet Impala Convertible. He learned that his family had sold the car, but it didn’t matter now, he was alive and glad to be back on American soil with his family. Ron never forgot that Impala though, and he and Carol started their lives. The family started growing with more kids and Ron started his collection. Ron finally had a chance to buy a 1962 Chevrolet Impala Convertible again. The collection started to grow and not only with Chevrolet Convertibles, but Ford Convertibles, and even a 1970 Dodge Charger RT. It was Ron’s goal to get a Chevrolet convertible from every year from 1955 to 1970 and of course, other cars that he just thought were cool.
Ron and Carol had a variety of cars to choose from, in the collection, to take a cruise in. Ron and Carol had many great times with friends, the local car club, and adventures in their Convertibles. Ron and Carol are retired and now the collection will be sold at auction. Ron and Carol want the cars to go to families and people that can start their own memories with a car from their collection.
The collection is impressive with a Chevrolet Bel Air or Impala Convertible from 1955 to 1969. The cars are restored or originals and would be a great addition to anyone’s collection. It starts with the Trifecta of the Tri-five Bel Air Convertibles. 1955, 1956, 1957 Chevrolet Bel Air convertibles and many of which have high performance options. There is an Impala Convertible from every year from 1958 to 1969 that will be sold. Of course, Ron is keeping a few cars so Carol and he can cruise through their Golden Years. You just can’t keep that gas and oil out of a car guys’ veins. The collection not only has Chevrolet Convertibles, but a beautiful 1956 Ford Sunliner convertible and even a 1957 Ford Fairlane 500 Skyliner Retractable hardtop. There is more than Bowtie Muscle with a 1968 Pontiac Firebird Convertible and even a 1970 Dodge Charger RT that Ron bought from the original owner and the car is an original survivor in Plum Crazy Purple. There are also Antique tractors and an assortment of Chevrolet parts. When VanDerBrink Auctions walked into the collection it was “Holy Chevrolet Convertibles Batman!”
VanDerBrink Auctions, LLC will sell the collection LIVE ONSITE with ONLINE bidding for those that can’t make it, but looking for those fabulous Convertibles. The auction will be September 19th, 2020 10am on the Windels home outside New York Mills, Minnesota. Rain or Shine, you won’t want to miss this chance to buy a beautiful Convertible or Classic. Preview will be Friday September 18th, 2020 from 10 to 6 with a celebration with the local car club that Evening. The auction will kick off Saturday, Sept. 19th, 2020 at 10Am. Be on time, the tractors sell then right into the cars. Check out the catalog and get ready to buy a piece of this amazing collection! For more info www.vanderbrinkauctions.com Or call VanDerBrink Auctions at 605-201-7005.