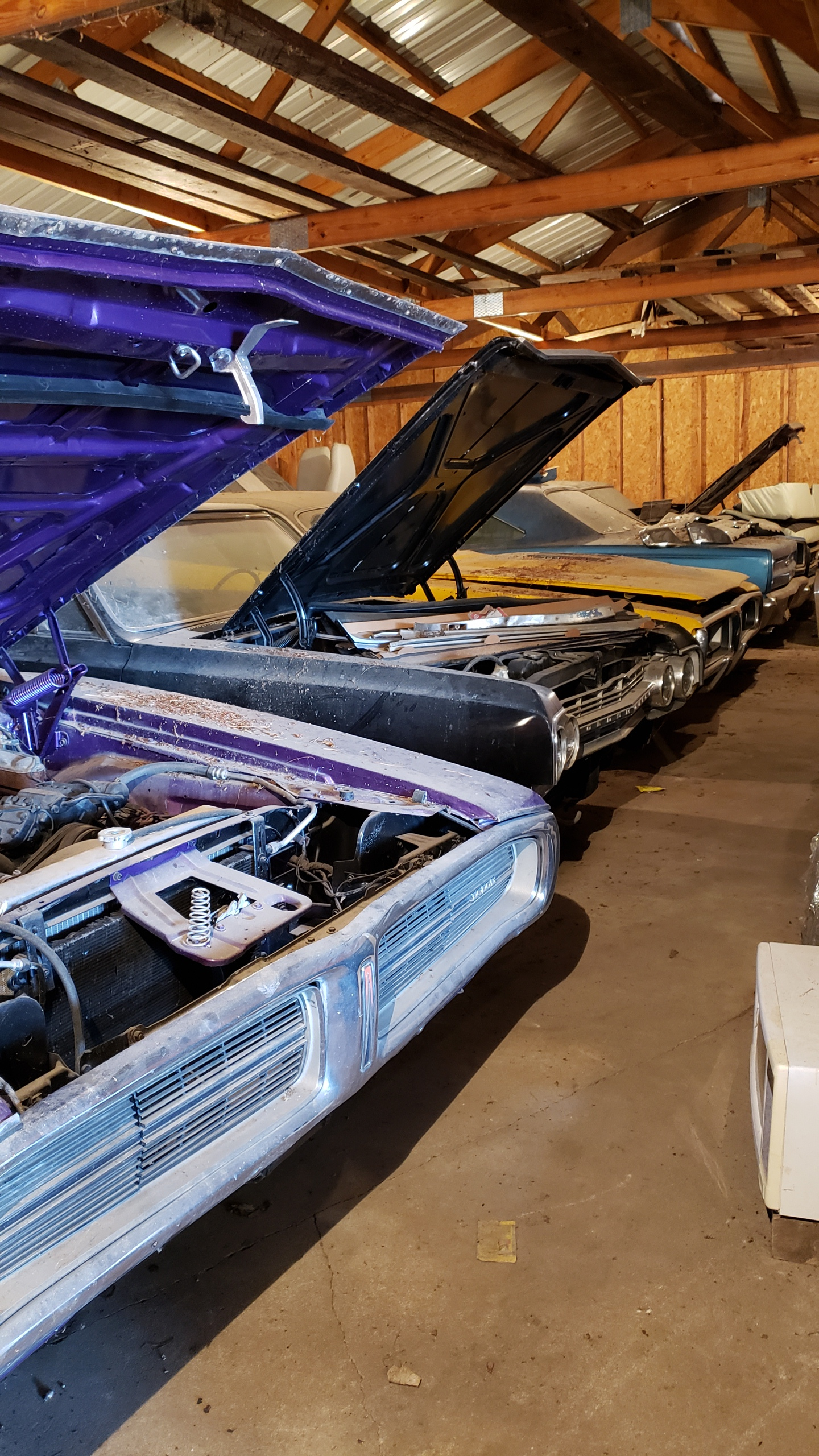 Finding that next big Barn Find is always the dream of every car guy and gal. Yvette VanDerBrink, owner VanDerBrink Auctions, LLC has seen and worked with many Barn Find collections and always looking for the next find. VanDerBrink Auctions was selling a collection in Iowa in 2018, a quiet man came up to Yvette after the auction and said, “I would like to show you my collection?”

The location didn’t GPS and turned into a path that wound up in the trees to an arrangement of buildings. Coyote Johnson, as his name soon would imply, would give clue to what was in his over 40-year collection. Coyote, unlocked and opened the 1st building was filled with dust covered Muscle Cars in every color of the rainbow. Those wonderful Mopar colors along with survivors of the great muscle car era. Yvette VanDerBrink was taken back with the amazing collection and wondered what was in the rest of the buildings. Building after building filled, packed tight with Muscle Cars. Chevelle’s, Camaros, Firebirds, GTO’s, Challengers, Cudas, Impalas, Tri-Five and more. Coyote Explained that he hadn’t shown anyone, not even family members, the collection in over 40 years! They have just been tucked away. Curious, Yvette asked Coyote, how he got his nickname, was that his real name?

When Coyote was in High School, he got a call from his Mom, she said had bought him a car. A 1969 Road Runner, Green and white. A man had come to the place where she worked and said he had to sell the car because he was going to have a baby. Always willing to help, the Johnson’s bought the car. Little did his Mom know that car would be the star of this amazing collection. Coyote still has the 1969 Roadrunner with his letter jacket still in the front seat just like he was ready to go school. The Roadrunner soon taught Coyote that if you had the cool car, you’d get the girls and gain some respect with all that power. Having all that horsepower, Coyote was no stranger to the area drag racing scene. In fact, that how he got his nickname, Coyote, from chasing Roadrunners at the drags. “Every summer weekend, if you had a hot car, you went outside Farragut, Iowa and race”, Coyote said. Coyote won the races and the girls and gained a reputation as having fast cars. Coyote is a 3rd generation contractor and worked with his Dad. He went to college in Colorado and spent a lot of time trapping, fishing, and even had a Raccoon living under the front seat of his 1957 Chevrolet. Coyote came back to Red Oak and started his own construction company. Business was good! Coyote would grab the classified and search for adds for muscle cars from his Glory Days. He would buy as many as he could and just pack them away. At first, he would restore them, drive a bit, and park them in the sheds. Soon Business took over and still buying cars, they were just packed away.

The Coyote Johnson Collection has over 100 Muscle Cars from the Glory Days of Horsepower. Challengers, Cudas, Chevelle’s, Camaros, Firebirds, GTO’s, and more. Coyote and Yvette walked through the buildings and talking about the cars as he would rattle off memories of which ones of the cars, he would have beat racing and memories of those days of High School, when these cars were a dime a dozen. Yvette could tell that they were more like children and loved them all and the memories that with them. Coyote has decided to sell the collection, and will keep just a handful of them including his high school car and Dad’s 1957 Chevrolet. He’s working on giving his Mom a ride in the Roadrunner in her old age. The cars will all be sold NO Reserve on Sept. 14th, 2019 at the Montgomery County Fairgrounds in Red Oak, Iowa. The auction will be onsite and also with online bidding. Coyote, being the kind hearted and quiet person he is, is donating all the food revenue from Friday Sept. 13th’s, Preview day, to the area Animal Shelter and Sept. 14th’s Food Sales, during the auction, to area Police, Ambulance, Cancer Society. He is an amazing person. They have been busy giving the cars a bath and getting them running. Coyote wants them all to go to good homes and back on the road racing that horsepower and reliving their Glory Days. It’s going to be an amazing auction and you won’t want to miss it. Inventory, Pictures, catalog and more can be found at www.vanderbrinkauctions.com.