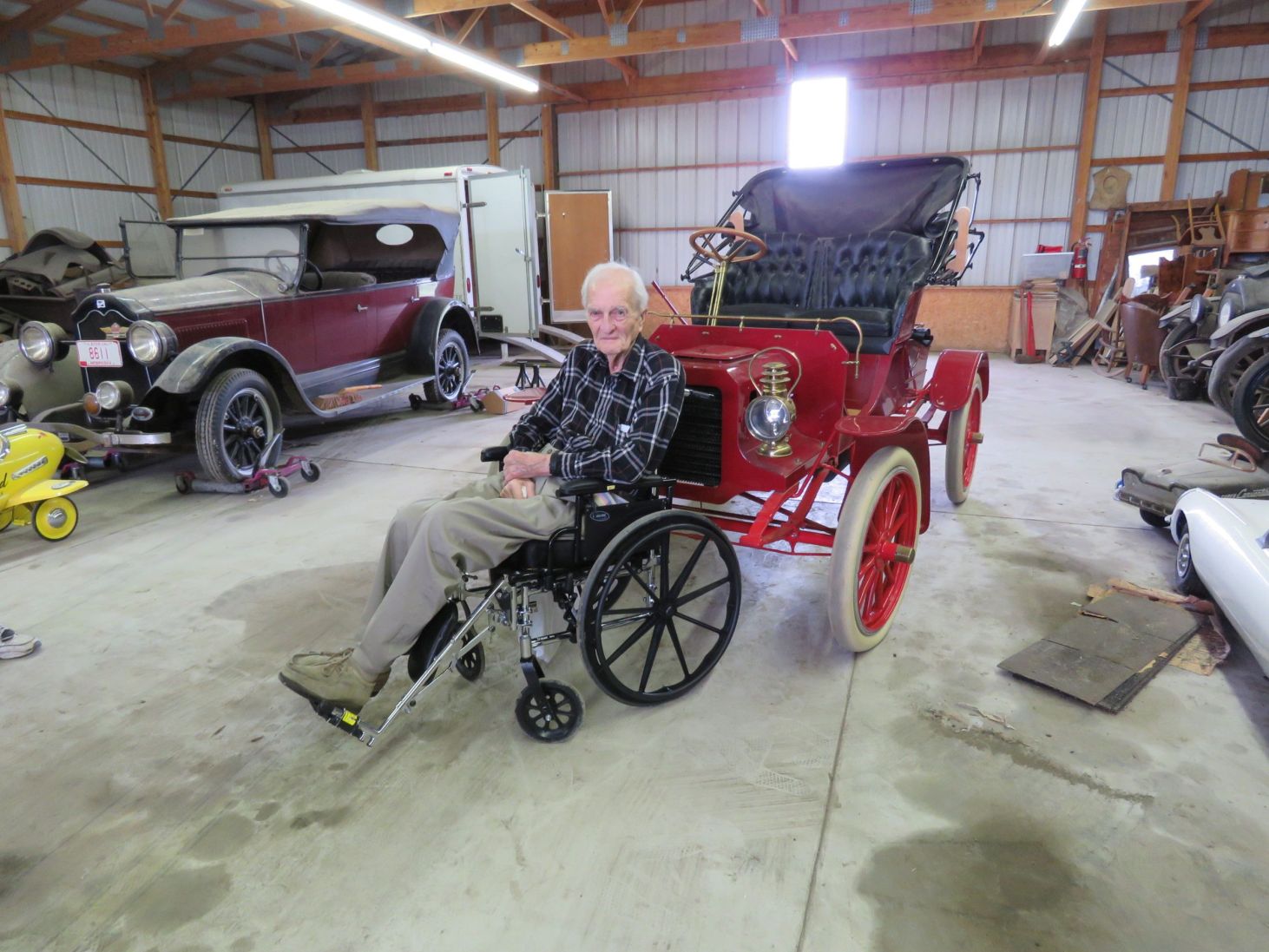 Born in Lincoln, Nebraska, just like any farm boy, Mr. Doan dreamed of owning that first car and the freedom that a car brings. Since he was 3 years old, Mr. Doan could name all the cars, their features, and dreamed of the day that he would have his own. He went into the service and got his first car when he got out, a Model T Ford. He bought it on a farm sale for $12.00. He had a great time working, earning money, and being a playboy, and of course, enjoying his big cigars. He wasn’t in the market for a wife, but then he went out on a blind date and met the love of his life- Shirley. He knew immediately, that he was going to marry her. That’s when his life and Motto changed to “Cars, Cigars, and Shirley.” They married in 1952 and are happily married for 65 plus years. They had one son, Houston. Mr. Doan worked at a local department store and “Curbed” cars on his off time. I had never heard that term before, and he explained to me, that they would buy used and new cars at local lots and sell them privately on the sides of roads- “curbing”. When he was working at the Department store, they had a REO Roadster on display. He bought the car and still owns it today and will sell in the auction. Mr. Doan and his partner started the areas first Nissan/Volvo dealership in the Lincoln, Nebraska area in 1968. This was a great time especially since it was at the beginning of the start of the gas wars and smaller more fuel-efficient cars coming into the US. Houston, his son, helped at the dealership and also in some of his Dad’s other adventures. Mr. Doan, was active in the Cast Iron, vintage toys, and Pedal car hobby. Mr. Doan would travel throughout the US, also known as “Crooked Herman’s Pedal Cars” and would come home with many treasures. Mr. Doan, developed molds and made his own pedal cars that replicated many of the cars that he grew up with. They were done with meticulous detail and he sold them all over the US. There will be several of his handy work on the auction, one of which is a Ford Model T Center Door Coupe. There will also be an assortment of handmade parts on the auction for pedal cars.

Mr. Doan, while traveling around the US to toy shows, would pick up collector cars on the way. The 1905 REO Roadster that he first bought is on the auction along with a 1939 Buick, 1924 Buick, 1966 Ford Mustang Convertible with less than 18,000 miles, among others. He particularly liked the Brass era and early cars. One of his favorite cars on the auction will be a 1951 Citroen Traction Avant 4dr Sedan that he bought out of Washington. They sold the dealership and investing in real estate allowed them the life to enjoy all their hobbies, and Mr. Doan fulfilled his hobby and Motto- “Cigars, Cars & Shirley”. While I was talking with him, I had to get my husband’s Cigar lighter for him. While he wheeled around talking about all his treasures and the stories with them all in the sweet smell of cigars, I thought back thinking about how much fun he was having and the life that he led.

After many years of working with collector cars of big and small, Mr. Doan and his wife are in their 90’s and live in an assisted living apartment and have decided that it’s time to sell their collection. VanDerBrink Auctions will sell the Doan Collection on October 20th, 2018 at 9:30am on the farm on the edge of Lincoln, Nebraska. The collection hosts an assortment of Collector Cars including a 1905 REO, 1939 Buick, 1945 diamond T Truck, 1966 Mustang Convertible, and an assortment of Ford Model A & T Cars. There is also one of Houston’s high school friend’s 1958 Triumph TR3 Roadster that is barn fresh. Along with the big collector cars is approx. 70 Pedal cars and even more Cast-Iron Toys including Hubley, Arcade, Kenton, and many rare pieces. The auction will be live in person at the farm and bidders will also be able to bid online. For more info www.vanderbrinkauctions.com. See you at the auction, and come and bid on a piece of the amazing Doan Collection.