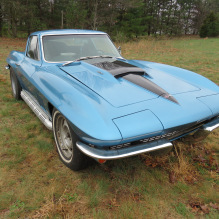 For a Car Guy or Gal, you never forget your first car. There’s something genetic-in born in a collector that gets the gears going. Stirs up the desire to go fast-develop that love of cars. For Tom Brown, his Mother said that at 3 years old he was looking at cars and started showing that car gene. If his Dad or Grandfather was working on a car, Tom was there. He loved everything to do with wheels. Growing up around Cincinnati, Ohio, there was a lot of cars. He’d sit and watch them all go by, waiting for his turn at the wheel. Tom finally got his first car, a 1951 Ford Shoebox Sedan. He traded up for a 54 Ford that he hopped up and started street racing, but he couldn’t beat those Chevrolets. He bought himself a 1961 Chevrolet Impala, black with a 350hp 348V8. He loved racing, but not on the track. But hitting the back roads, hammering down and earning extra cash. That Chevrolet won the races and got the girls. Well, not only did the racing get him in some trouble, but also had to get married. The black Impala was sold, but the trad off was worth it. He was rewarded with a son, Mark. They did everything together and he inherited that car gene, too. They dove into the hobby. Buying cars, fixing cars, and even started to build a shop. But sadly, his son passed away early. But, his son always had his best friend with him. Tom, to this day, does cars with Brett, his son’s best friend. Tom worked at the Fisher Body Plant and learned a lot. They also had machines to make and work with the parts for his restorations. In the early 1970’s he would fly one way to California and drive back rust-free muscle cars. He would buy privately and even stopping people driving down the road. They were sold even before they were off the trailer. . But there was a number of the cars, that he stored away for himself. Tom spent many hours searching for rare and hard to find Big block GM parts and also packing them away for his restorations. Chevelles, Camaros, Impalas, Novas, and even a few Fords built the collection. Word started to get around about Tom Brown and his fantastic Muscle cars. He was the “Big Block” guy. Tom didn’t want to be famous, but soon he just slipped out of the car limelight. With some health issues and time, realizing that he was never going to restore everything, he decided that it was time to open the doors to the sheds one last time. This time, the last time offer his collection of GM Muscle Cars, Ford Street Rods, Sedan, Coupes, and more, along with a hoard of GM Big block parts to the public. Tom is full of antidotes and wisdom. When you’re talking with him, he’s sure to give you some he’s gathered from the years. “Everyone should be poor, and everyone should be ugly. It will teach you a lot and help you get along with everyone.” Well after taking in his own wisdom, even though a hard decision, he made the decision to sell the collection.

VanDerBrink Auctions, LLC was contacted to conduct the auction. Yvette VanDerBrink, owner of VanDerBrink Auctions, LLC came to Michigan to work with the collection. Those doors to the barn opened and there was Horsepower as far as you could see. The whole place was packed full of Camaros, Chevelles, Corvettes, and even a 1933 Ford 5 Window Coupe. Not only the Cars, but so many Big block parts. It was amazing,” said Yvette VanDerBrink. “Being a Chevelle and Camaro girl, it blew me away. My kind of Candy Store.” The auction will be No Reserve and held On-Site at the Barns in Vicksburg, Michigan. Online bidding available on all cars and some parts. The majority of Big Block parts will be for onsite bidders only. The collection has cars from GM Glory Days. Multiple 1967-1969 Camaros including a 1968 Camaro that was sponsored by Berger’s Chevrolet in Drag Racing. Multiple 1966-1972 Chevelles including a LS6 Chevelle and a 1967 Chevelle SS convertible. Corvettes are heavy in the collection including a 1967 Corvette Stingray Coupe with 427-Tri-Power and 4speed transmission, other 427 and 454 Corvettes. Not forgetting those Fords, there is a 1933 Ford 5 window Coupe and wonderful 1946 Ford Sedan Delivery. This auction will satisfy that Big Block craving you have and you won’t want to miss it. The auction will be NO Reserve and held  August 25th, 2018 at 9am Vicksburg, Michigan. For more info, pictures, and catalog check www.vanderbrinkauctions.com or Call 605-201-7005. See you at the Auction.